“It was like I never existed before Undugu and it never occurred to me that I was searching for wealth elsewhere when it was readily available and accessible within my village. The best way to pay back Undugu is to employ my privileged position in the service of others”. Mr. Harun Nyamweya

Many folks in rural areas perceive relocation to urban areas as an automatic passport to economic prosperity. One such rural folk is a 54 year old Mr. Harun Nyamweya who completed his secondary education in 1981. As the sixth born in the family of ten and the only one with formal education, Mr. Nyamweya embarked on a journey which he thought would free him from the shackles of poverty that his family was synonymous with. His search for job opportunities took him to Mombasa, a coastal town that is located about 1000 kilometres from his home in Tabaka (Kisii).

The economic position of his family at home could not afford Mr. Nyamweya the luxury of staying in one job for long. He therefore hopped from one job to another in the hope of striking economic success but all in vain. His dream of economic prosperity in a faraway land was fast fading away. He could no longer hold onto a hope that was proving hollow year in, year out.

In 2007, Mr. Nyamweya resolved to return home and opened a small soapstone shop, with the little disengagement funds that he received from his employer, to try his hand in business after many working years that proved unsuccessful as the income he earned could not make ends meet. The shop sales were barely enough to cater for his family’s needs and as he puts it, the poverty he was running away from was once again stubbornly staring at him in the eye.

Mr. Nyamweya heard of  Undugu’s market access initiative and approached it for possible consideration. After an initial assessment of his background and goals, he was enlisted as a soapstone producer in mid-2008 and taken through Undugu’s practical business management and export capacity building programs that entail book keeping, costing and pricing, quality management, product development and fair trade principles.

He received a trial order for supply of tea-light holders (family of 5) which he successfully delivered. He still keeps the prototype he made for the order as a souvenir of his magic key to economic success that had eluded him for so long. 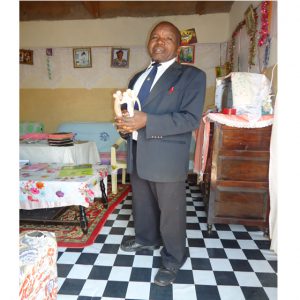 One year after joining Undugu, Mr. Nyamweya was able to purchase a commercial plot in Tabaka Town. In the next 12 months, he concentrated his efforts on developing the plot, which currently hosts the offices and production facility of Undugu Fair Trade Limited.

Mr. Nyamweya also transferred his 5 children to private schools where the quality of education is deemed to be higher.  Two of these children are pursuing university education. He attributes his ability to educate his children to constant flow of business orders from Undugu Fair Trade Limited.

In the last 3 years, the need to give back to the community has become Mr. Nyamweya’s preoccupation. He is at the forefront of community empowerment as he supports education of three orphans –   two of them are in secondary school which cost him about USD 600 in fees per year per child.  He  also a co-founder of a business entity that buys raw coffee from over 900 farmers and in turn sells semi-processed beans to factories in Nairobi. Mr. Nyamweya has become instrumental in mentoring a number of upcoming producers particularly those enlisted owing to their difficult economic and social backgrounds. He employs 11 people in his production workshop.

In the past 5 years, Mr. Nyamweya’s profile has grown substantially in the community. He has been elected as a church elder, serves as a board member in the local secondary and primary schools, elected head of village conflict resolution committee on land, chairman of Tabaka producer group, and has recently been appointed to the County Conflict Resolution Committee. He has become a key centre of influence in his community as politicians and other leaders seek his opinion on key development and social issues.

He no longer relies solely on soapstone business with Undugu and has diversified his income sources. Mr. Nyamweya supplies his soapstone products to customers in Tanzania, Uganda, and retail shops in Kenya. He has invested in dairy cows, coffee and team farms, and rental buildings.

Mr. Nyamweya attributes his change in economic fortune and status in the community to Undugu Fair Trade Limited’s transformative agenda that has also positively impacted on many in his society. “It was like I never existed before Undugu and it never occurred to me that I was searching for wealth elsewhere when it was readily available and accessible in my village. The best way to pay back Undugu is to employ my privileged position in the service of others” concludes an emotional Nyamweya.